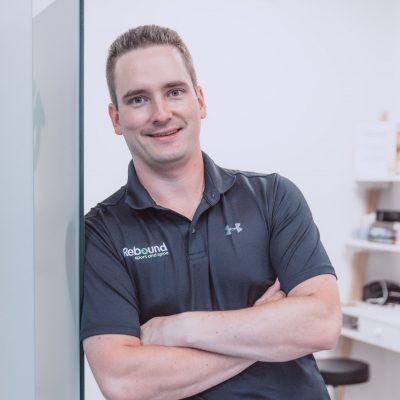 Hi there everyone, I’m Dr. Cory. I am the newest chiropractor here at Rebound Sport and Spine. I have written a few blogs for Rebound with some information about chiropractic and back health topics but today I would like to go in a bit of a different direction and give you a bit of a story. One of the most common questions I get from friends, family, and patients who know that I am an early career chiropractor is “what got you in to chiropractic?”, so I figured I would share my answer with you all.

I wish I could tell you that me becoming a chiropractor was fate or that it was a lifelong goal of mine, but this isn’t that kind of storybook tale. What I wanted to be when I grew up changed so often when I was young that it was hard to keep track. At different stages of my life I wanted to be anything from an author, professional athlete, journalist, or coach to a psychologist, referee, scientist (not far off I guess), or a wizard (thank you Harry Potter fandom days).

When I was growing up, I enjoyed team sports like many children but also enjoyed mentally stimulating and challenging activities such as reading. After trying a number of different sports, football become my sport of choice due to its physicality but also the strategy involved in it. As I grew older and my love for football grew, it became increasingly obvious to me that I was simply not good enough to play at the next level and that the only way to continue in the sport was to become a coach. This presented an opportunity for me to combine my love for sport with my affinity for analytical and tactical thinking while challenging me to work on becoming a leader. The choice to get in to coaching also turned out to have a profound effect on my life.

I started coaching football at 16 years old. From 16-18 years old I both coached and played for Langley Minor Football, coaching the little guys during early practices before scrambling to get my gear on for the late practice as a player. Through this period, I was tasked with deciding what I wanted to do after high school and, after taking a gap year after school to work and coach, I decided that I wanted to do anything I could to pursue a career that would enable me to be involved with athletics and sport so I began my Kinesiology degree at University of the Fraser Valley. I spent 4 years at UFV focusing mostly on Kinesiology but with a class load slightly less than a full schedule due to working 2 jobs and coaching on 2 football teams as I had then started to coach with the Langley Rams Junior Football team in addition to Langley Minor.

Though I entered university with no exact idea of what I wanted to do, I came to develop an urge to help people and wanted to pursue a career where I thought I could best use my abilities to do that. I began to focus on teaching or physiotherapy as career options for a couple years until one year where we had a change with our training staff with the Langley Rams when Dr. Mark got involved. In getting to know and getting to work with Dr. Mark, I began to see chiropractic as an option to help people in my community as well as staying involved with sports. After more research into the field, careful consideration, and some mentoring from Dr. Mark, I decided to apply to chiropractic college.  This would typically be where most in my position would talk about simply going off to their school of choice and completing their degree, but not all roads come without bumps.

My first choice for chiropractic college was University of Western States in Portland due to its proximity to home (it is the closest school to us in BC). I had applied to the school, got accepted, visited the campus on a couple occasions, and even went as far as putting a deposit down on an apartment with a friend from UFV who I would be attending UWS with and was ready to move down to Portland in about a month at that point. The only problem was, my funding still had not come in. In the end, it turned out that I could not secure enough funds to qualify for a student visa and was forced to table my acceptance for the time being. It soon became clear to me that international student fees along with the exchange rate would make it very difficult for me to be able to make it work in Portland, so I set my sights elsewhere.

After some more searching, my choice became easy for me, Canadian Memorial Chiropractic College in Toronto would be the school where I would become a chiropractor. The school was the only English-speaking school in Canada, had an evidence-based curriculum, and I had family in Toronto I knew I could rely on for support. However, by the time I came to this conclusion, applications for the next school year had just closed, giving me even more time to wait for my next shot at admittance. Luckily for me, I had tremendous support from family and friends who got me through the year culminating in my acceptance to the CMCC Class of 2021. I spent 4 years at CMCC living in the Toronto area where I made great friends, got to reconnect with some family, and even managed to convince my girlfriend who had moved there with me to marry me. After 4 challenging but fun years, I graduated Summa Cum Laude as a Doctor of Chiropractic in June 2021 after finishing the last half of my internship with Dr. Mark here at Rebound.

It’s been a long and, at times, difficult road but it wouldn’t trade my journey to chiropractic for anything as it has helped me grow in ways I cannot describe. At the end of it all, I am grateful for everyone who has helped me get here, honoured and humbled to get to help people improve their lives, and excited for the future, not to mention extremely happy to be part of such a great team here at Rebound.

For anyone who took the time to read my story: bravo, you have some real patience! But also thank you for taking the time to hear it out, I do enjoy sharing it. Hope to see you in the clinic!